You are here: Home » Icy Wolf Moon or a Green Cheese? 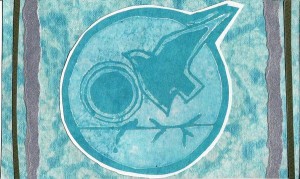 Sometimes I really have to laugh at myself.  The most obvious of things can catch me unaware in a way that strikes me as hilarious.  Case in point…

Yesterday I experienced such a rush of anxiety.  Somehow it occurred to me that the year had only 365 days in; a mere 30+ days each month.  I started to feel the crush of all the things I wanted to do and pay attention to and to explore and suddenly it didn’t seem like there was anywhere near enough time.  I made a list of things I HAD to get done during the day and there were 12 things, each of which would take a minimum of an hour, and then suddenly I realized the day would be done and I wouldn’t have managed to fit in any fun, nor done anything other than “maintenance” kinds of stuff.  Before I spiraled too far down the black hole of despair, I did two things.  I put my hand to my heart and took some deep breaths.  Ahh.  This has become one of my favorite go-to tools.  Seriously, simply taking a mindful breath or two (or five or ten) can be so powerful.  It’s centering, it’s grounding, and it creates spaciousness around things.  Because it brings you right back into the moment, pulling all the energy you’ve shoved out ahead of yourself into the future right back around you into the moment where it belongs.

The other thing I did was talk to friends.  With the first welcoming hello giggle I was suddenly shifted out of doom into the returning sense of possibility.  Friends can do that for you – provide a little soul balm; help create a more accurate perspective; and just simply loveify, which of course makes everything better.

And then I remembered it was the full moon.  Which is the amusing part because I KNEW it was the full moon.  I have a practice where I pay attention to such things and work with the phases of the lunar cycle.  And in fact I had spent time playing doing a full moon vision board.  I don’t do full moon vision boards every month, but I do them at least a couple times a month.   When the moon is full in my Sun sign (which is where it was yesterday) and then again when it’s full during my Moon sign (which will be in Scorpio).

Full moons can be particularly powerful when they activate certain parts of your chart, and whenever the moon is in Cancer we are offered the opportunity to process emotional stuff more readily.  Yesterday’s certainly did that for me.  Took me to my watery depths.  I’m entirely grateful that given it was the Full Ice Moon, I didn’t get frozen there.

But it is a kind of hedz up.  Seems I’m concerned about time in ways I hadn’t been quite so aware of before, and now that it’s on my radar we’ll see how I can open this up a bit.  Time has always been a tricky one for me, but I’m thinking this year will have a lot to teach me about it.

Speaking of tricky and while on the subject of the moon, I can’t help but mention another name for the full Ice Moon is full Wolf Moon.  And that reminds me of the tale of the fox, the wolf, and the cheese.  You can read it here if you’re interested.

The expression that the moon is made of green cheese hints at one being gullible like the wolf.  But rather than thinking of the moon as being green in color, green cheese actually refers to young, un-aged soft cheese.  However, I do like this 18th century depiction of the moon as a green-colored cheese don’t you? 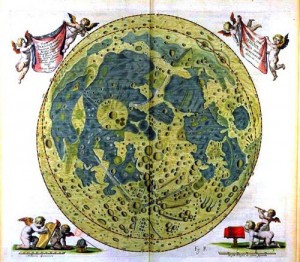 Have any full moon tales to share?  Ever been a gullible wolf or a smart fox?  Love cheese?  Find time a tricky companion?  Do tell – you know I love to hear.