Mad or Vain – You Tell Me

Today, October 6, is Mad Hatter Day and happens to be one of my favorite celebrations. Based on the Alice in Wonderland character who wears a hat with a price tag of 10/6 on it, the stated function of the day is to celebrate the silly and ridiculous.  But I’m much more interested in the chapeau recognition. Millinery may not be in my current skill set, but it is part of my bloodline – my mother was a milliner at one point.

It was mercury poisoning that led so many “hatters” to become mad. Thankfully that isn’t an occupational hazard anymore. But it always seems a bit ironic that given the challenging association with hats and mercury, that Mercury/Hermes himself would happen to wear one of my all time favorite hats – his winged helmet. I have a great love for Mercury/Hermes – an affinity for all psychopomps really.  I mentioned a few days ago that I’m deeply immersed this season in the journey of Persephone as Queen of the Underworld, and of course my beloved Mercury/Hermes plays a part in that story as well. He, as a traveler between worlds, was the one who brought Perspehone back up to join the world of the living.

This is one of my favorite images of Mercury/Hermes painted by Evelyn de Morgan in 1873, image courtesy of The Anthenaeum. 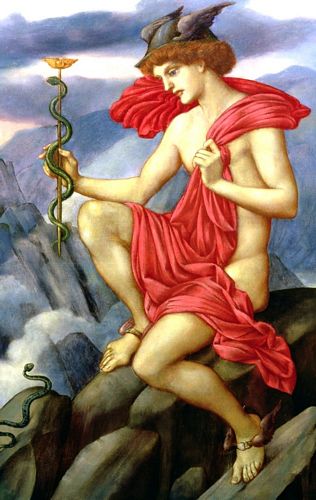 I also love this image – it’s exactly the kind of hat I imagine Persephone might wear during her above times. She may need to give up her crown as Queen of the Underworld for half the year, but I think perhaps she’d be happy to wear the pomegranate reminders. 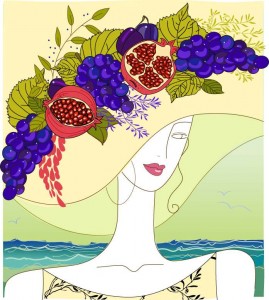 The association between above and below – light and dark – is a theme that has always interested me. But I have to say I was utterly delighted when I found a hat connection as well.  Billy Collins wrote a poem about Goya’s candle hat. Listen here to hear him read the poem, and you can find a photo of Goya’s famous self-portrait here.  I’m in love with the idea of candle hats, and think they’d be fabulously fashionable headgear not to mention a great asset when traveling to the underworld.  Don’t you agree?

Another project I’m working on has me referencing the tarot archetypes of Fool and Magician. As I’m pulling the cards from numerous decks, I couldn’t help but smile that the Fool from Tarot of the Trance and the Magician from the Joie de Vivre deck are hatted in rather delightfully mad ways. 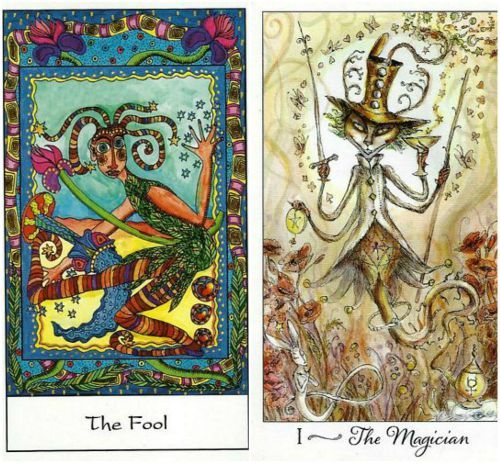 I have a strong affinity with the Fool, and one of the journeys this archetype always opens for me is how much work there is to be done in reclaiming the positive aspects of what frequently gets judged as negative.

This pointy-headed woman is ages old, from a time when I was obsessed with paper mache. When I made her I was fascinated with the idiom “pointy-head” – the disparaging term meaning stupid, or alternatively “intellectual, especially in a self-important or impractical way.” 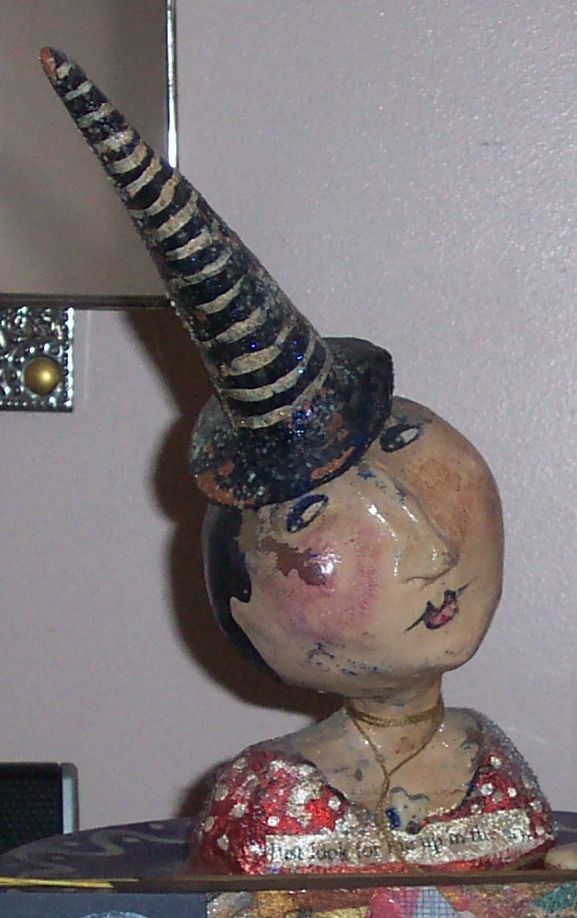 I wanted to reclaim pointy-head as wise – as reaching an upward pinnacle.

To perhaps even reclaim the dunce cap – that conical hat marker of shame – which seems not so different to me to than the pointy caps witches and crones are portrayed with. Middle Age depictions of witches don’t show these kinds of hats, but by the time of the Victorian Age these pejorative images appear regularly.

Reclaiming pointy-head as wise, I wanted to reclaim the pointy hat as a wise dome, and hence, one with wisdom.

And there you have it. I’ve taken you through a rather circuitous exploration of hats that delight me, and perhaps that’s a fitting journey for a Mad Hatter.  You might in fact say this celebration is one of my vanities. But I’m going to guess that you think I mean something other than I do. Vanities is actually is a 15th century term for hats. And how perfect is that for today?

So what do you think – am I mad or am I vain?  Hat’s off to you if you leave a comment – you know I love to hear from you.