You are here: Home » Random Musing: O is for…

Random Musing: O is for…

Oh, how did we get to O in my abecedarium already?  No matter.  Contemplating that delightfully round form, so many things come to mind…

The moon for instance.  Particularly today, since we’re celebrating a full one.  While moon obviously doesn’t start with the letter O, it does have two of them holding center court, so I suppose that counts for something.

But I actually have two moon-related O things I want to mention.

First is origami.  Paper lover that I am, it’s no great surprise that I like origami and the pleasures of folding.  I’ve been working on prototype of a future offering, and part of it involves a few origami folds.  First a little folder, and then a little folded book.  Can you guess what the topic might be? 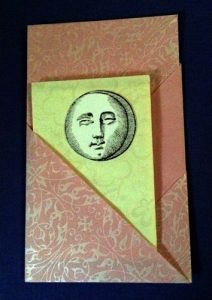 That moon may be the very one that shown on one of my favorite couples – The Owl and the Pussycat.  I love that poem/story/nursery rhyme by Edward Lear.

I recently handed over a book I’d finished reading to my husband. I quite enjoyed it and I’ll be reviewing it shortly, but for now let me just say that some of the most important characters in the book are storytellers. And as part of culture, guests are always invited to tell a story.  My husband asked me what story would I tell? While I literally couldn’t think of a single one, he rattled off several he might tell. But he settled on The Owl and the Pussycat.  Which just might give you an idea of one of the reasons I love him so much.

Leonard Leslie Brooke is the well-recognized artist who illustrated a number of Edward Lear’s works, including The Owl and the Pussycat.  This image of the newlyweds dancing under the light of the moon is in the public domain. 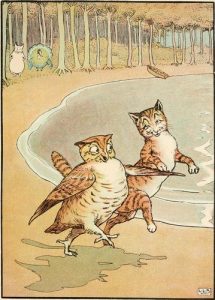 I hope you take the opportunity to dance under the light of the full moon. And perhaps tell a story as well.  But in the meantime, what “O” thing is inspiring you?  What delight has caused you to exclaim Oh!  Do tell – you know I love to hear.